Start a Wiki
Prancer is one of the tritagonists in the Robbie The Reindeer films. He is one of Robbie's best friends, a member of the sleigh team and is the boyfriend of Emmy.

Role in Robbie the ReindeerEdit 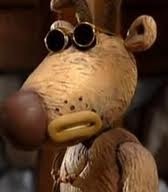 Prancer is first seen about attack Robbie (who was covered in items) believing him to be the last of a rare endangered species but Donner stops him when Robbie removes the items revealing himself and is the first reindeer Blitzen introduces to Robbie.

He is later seen with Vixen when Blitzen rants about his hatred of Robbie's father Rudolph. He along with Vixen, Donner and Tapir, is gagged by Blitzen for nearly saying Rudolph's name.

He is later seen exercising which a rather unfit Robbie is having difficulty with.

A month later he is briefly seen having physio by Donner and leaves just as Robbie is waiting for his turn and gives him a high five. He is later seen picking up an invitation posted to Reindeer Lodge, but he cannot pronounce what is written on it. He gives the invitation to Vixen, who says that it's for a party at Santa Claus's house. Prancer is then seen with the rest of the Sleigh Team attending the party, where Santa is showing off his new sleigh.

Prancer is then seen competing in The Reindeer Games event The Steeplechase where he is shown not to be as fit as the other competitors.

He is last seen playing air guitar on a tennis racket. 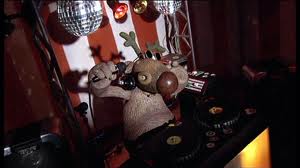 Three years later, the reindeer set up a travel business called North Pole Holidays but it isn't very popular. Prancer first appears to tell Robbie and Donner about something going on outside which is two tourists complaining about the conditions of the chalets (which Robbie built badly) and that there's no snow to ski in and are refunded by Donner.

Due to not being able to afford the water, the reindeer have to share a bath. Prancer says that he preferred just working one day a year to which Donner tells him that Santa gave away all the presents for free and that's why he couldn't pay them, which is why they have the travel business now.

The next morning, Prancer and the other reindeer are shocked when Blitzen arrives at Reindeer Lodge saying he got let out of prison because he's sorry for what he did, but the reindeer don't believe him and throw him out. However when Blitzen says he can help save their holiday business, they let him stay.

Blitzen tells them to build a luxury hotel which they do and Blitzen tells them that they should hold a champagne reception for their guest; internet billionaire Warren Hutch and says that there is champagne in the lobby. However when the reindeer go inside they find nothing and Blitzen locks them in there. He reveals that he along with Long Eared Jack are making an attraction called Blitzen's Reindeer World. That night, the reindeer find a weak spot in the hotel (which Robbie built) and Prancer easily knocks it down by blowing on it.

The following morning, whilst Robbie and Donner are having a disagreement about which way to go, Prancer gets captured by Jack (who was sent out by Blitzen to find the trio). After being brought back, Prancer along with the other reindeer have mind control hats (which to them feeling pain) put on them which turn them into robots and are used for Blitzen's Reindeer World. Luckily, Robbie arrives and saves them by removing the hats. Prancer then runs into Jack, but easily defeats him by jumping on him and starts to remove all of his masks, revealing that Jack is actually a robot being controlled by a criminal hamster named Carlos.

After Blitzen's defeat and Robbie and Donner's engagement, Prancer and the Vikings argue about what to hold for the tourists as the Vikings want to do a Viking show whilst Prancer wants to do a disco. In the end they get a Viking disco.

In this film, Prancer serves as best man at Robbie and Donner's wedding and falls in love with Donner's sister Em who's serving as bridesmaid. When Queen Vorkana and the Nargathrons arrive, Prancer along with Old Jingle and Tapir, hides in lockers and overhears Donner being captured by the aliens.

The trio (still in the lockers) leave Reindeer Lodge and find an Earth Guardian ship and meet with Robbie who learns from them about Donner's capture. Robbie gives Prancer the Nargathron Crystal he found the day before and tells him, Old Jingle and Tapir to try and contact the Earth Guardians before leaving in the ship to get to the Nargathron ship to rescue Donner.

The trio try to contact the Earth Guardians with free food but this fails and they return to Reindeer Lodge and learn that Em works for a government agency that monitors alien activity on Earth. Em has created a transmitter but can't get a strong enough signal but upon noticing Prancer having the crystal, she uses that to give off a signal just moments before the Nargathrons arrive and hold everyone hostage.

After the Earth Guardians arrive and defeat and arrest the Nargathrons, Robbie and Donner get married. At the reception, Em finally returns her feelings for Prancer and the two dance together with the rest of the guests and the Earth Guardians. 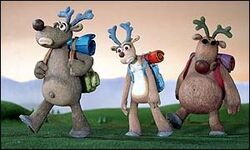 Prancer with Robbie and Donner 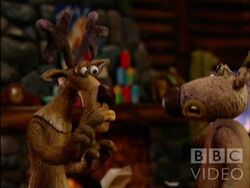 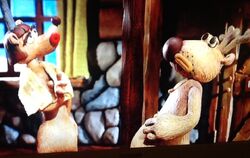 Prancer with Robbie, Blitzen and Santa with the new sleigh

Prancer at The Reindeer Games.

Prancer finds out Jack is a robot. 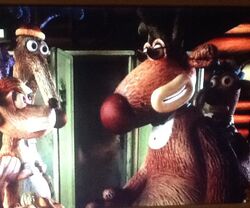 Prancer dancing with Em
Add a photo to this gallery

Retrieved from "https://robbiereindeer.fandom.com/wiki/Prancer?oldid=5353"
Community content is available under CC-BY-SA unless otherwise noted.