Start a Wiki
Tapir is a character in the Robbie The Reindeer films. He is a member of the Sleigh Team and a friend of Robbie's.

Tapir is a tall reindeer with greyish brown fur, long antlers, a pointed muzzle, a reddish brown nose, a flap like mouth and blue eyes. He also wears a skullcap.

Tapir is one of the reindeer Robbie meets when he arrives at Reindeer Lodge. He almost says the name of Robbie's father Rudolph but he along with Vixen, Donner and Prancer, is gagged by Blitzen, who hates hearing the name.

He along with the rest of the Sleigh Team attend Santa Claus's party to unveil his new sleigh Sleigh Mark Two.

Tapir is last seen taking part in The Reindeer Games.

Three years later, the reindeer set up a holiday business called North Pole Holidays, but it's not very popular. Tapir is first seen carrying paperwork in Reindeer Lodge (which is being used as an office for the business) but is accidentally knocked down by Robbie when he rushes in to tell Donner about the Viking that saved him.

That night, Tapir along with Robbie, Donner and Prancer share a bath. Tapir says that he wishes he had his own bath, but Donner tells him that they cannot afford the water. When Blitzen is mentioned, Tapir starts to panic and has to calmed down by Robbie who tells him that Blitzen is locked away and won't be out for a long time. However the next day, Blitzen (who has been released 50 years early from prison due to good behaviour) turns up at the lodge causing Tapir to start panicking again and along with the other reindeer throw him out, but when Blitzen says he can save their holiday business, they let him stay and he tells them to build a luxury hotel which they do.

Afterwards, Blitzen says they should hold a champagne reception for their honoured guest; an Internet billionaire named "Warren Hutch" and says there's some in the hotel's lobby. But when the reindeer go inside, they find no champagne and are then locked in there by Blitzen. Robbie asks Blitzen to let them out, but he refuses as they didn't get him out of prison and says he's going to make a attraction called Blitzen's Reindeer World along with Warren now revealed to be a master of disguise named Long Eared Jack. That night, whilst Blitzen and Jack along with their Rabbit Thugs are busy drinking and making ideas for the attraction, Robbie, Donner and Prancer break out and escape but Tapir along with the other reindeer are locked back in.

Later, Tapir, a recaptured Donner and Prancer along with the other reindeer have mind control helmets put on them that turns them into robots to be used in Blitzen's Reindeer World. Luckily, Robbie arrives and removes the helmets off them before going after Blitzen. Tapir is last seen watching an now engaged Robbie and Donner kiss before attending a disco being held in a now defunct Blitzen's Reindeer World.

Tapir is one of the guests at Robbie and Donner's wedding and joyfully cries as he watches Donner walk down the aisle and later watches as Robbie flee Reindeer Lodge after he hears a voice saying he's in danger. Tapir along with Prancer and Old Jingle, hide in lockers when Queen Vorkana and the Nargathrons arrive and kidnap Donner.

Later, Tapir, Prancer and Old Jingle (still in the lockers) run out of Reindeer Lodge and into the woods and find a Earth Guardian ship before meeting up with Robbie who learns from them about Donner's capture. Robbie gives them The Nargathron Crystal he found the night before and tells them to contact the Earth Guardians with it whilst he goes to rescue Donner.

The trio attempt to contact the Earth Guardians with free food but this fails. Upon returning to Reindeer Lodge, the trio discover that Donner's sister Em works for a government agency that monitors alien activity on Earth and has been trying to contact the Earth Guardians via a transmitter she made but it's not giving a strong enough signal. However, after notices the Nargathron Crystal, she uses that to give off the signal just seconds before the Nargathrons arrive and hold everyone there hostage.

After the Nargathrons defeat, Tapir along with the other guests watch Robbie and Donner get married and is last seen at the reception dancing with the guests and Earth Guardians. 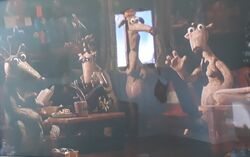 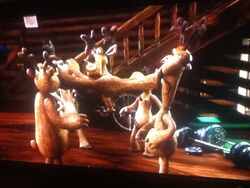 Tapir, Prancer, Vixen and Donner gagged by Blitzen for nearly saying Robbie's father's name.
Add a photo to this gallery

Tapir sharing a bath with Robbie, Donner and Prancer. 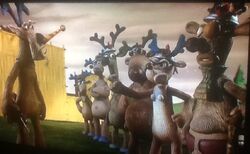 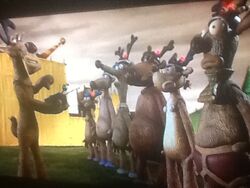 Tapir and the other reindeer turned into robots by Blitzen. 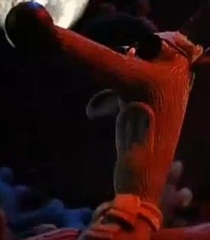 Add a photo to this gallery

Tapir at Robbie and Donner's wedding.
Add a photo to this gallery

Retrieved from "https://robbiereindeer.fandom.com/wiki/Tapir?oldid=5354"
Community content is available under CC-BY-SA unless otherwise noted.